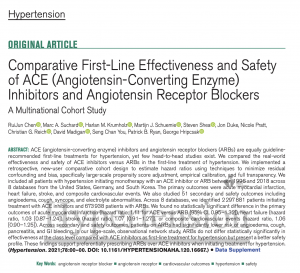 Two types of drugs that are recommended as a first treatment for patients with high blood pressure were found equally effective in improving cardiovascular outcomes, though the more popular type causes slightly more side effects, finds a multinational observational study led by researchers within the Observational Health Data Sciences and Informatics (OHDSI) community.

The study, which analyzed claims and electronic health data from millions of patients worldwide, is the largest to compare the safety and efficacy of ACE inhibitors and ARBs, two commonly prescribed antihypertensive drugs.

“Physicians in the United States and Europe overwhelmingly prescribe ACE inhibitors, simply because the drugs have been around longer and tend to be less expensive than ARBs,” says George Hripcsak, MD, Vivian Beaumont Allen Professor and chair of biomedical informatics at Columbia University Vagelos College of Physicians and Surgeons and senior author of the study. Columbia University serves as the coordinating center for the OHDSI community.

“But our study shows that ARBs are associated with fewer side effects than ACE inhibitors. The study was focused on first-time users of these drugs. If you’re just starting drug therapy for hypertension, you might consider trying an ARB first. If you’re already taking an ACE inhibitor and you’re not having any side effects, there is nothing that we found that would indicate a need for a change.”

The study was published online in Hypertension.

Once a physician decides to prescribe medication to control a patient’s high blood pressure, the next decision—which one to choose—is complicated.

“U.S. and European hypertension guidelines list 30 medications from five different drug classes as possible choices, yet there are very few head-to-head studies to help physicians determine which ones are better,” Hripcsak says. “In our research, we are trying to fill in this information gap with real-world observational data.”

ACE inhibitors and ARBs are among the choices, and because they have a similar mechanism of action, it’s not clear to physicians which one has an edge. Both reduce the risk of stroke and heart attacks, though it’s known that ACE inhibitors are associated with increased risk of cough and angioedema (severe swelling in the face and airways).

“We wanted to see if there were any surprises—were both drug classes equally effective, and were ARBs producing any unexpected side effects when used in the real world?,” Hripcsak says. “We’re unlikely to see head-to-head clinical trials comparing the two since we are reasonably sure that both are effective.”

The researchers instead turned to large databases to answer their questions. They analyzed insurance claims and electronic health records from approximately 3 million patients in Europe, Korea, and the United States who were starting antihypertensive treatment with either an ACE inhibitor or an ARB.

Data from electronic health records and insurance claims are challenging to use in research. They can be inaccurate, incomplete, and contain information that biases the results. So the researchers employed a variety of cutting-edge mathematical techniques developed within the OHDSI collaborative network to dramatically reduce bias and balance the two treatment groups as if they had been enrolled in a prospective study.

The researchers found that the vast majority of patients—2.3 million—were prescribed an ACE inhibitor. There were no significant differences in the ability of both drug classes to reduce the risk of major cardiovascular complications in people with hypertension. As expected, patients taking ACE inhibitors had a higher risk of cough and angioedema, but the study also found they had a slightly higher risk of pancreatitis and gastrointestinal bleeding.

“As a clinician, back when I had primary care patients, I often preferentially reached for ACE inhibitors first, reserving ARBs for those patients who could not tolerate ACE inhibitors, but as we dove into the literature, it quickly became clear that there was not a clear best answer and more evidence was needed,” says lead author RuiJun (Ray) Chen, MD, Assistant Professor in Translational Data Science and Informatics at Geisinger. “ACE inhibitors and ARBs are both commonly used medications for hypertension, both act on the same physiologic pathway, and are both equally recommended first-line therapies by major AHA/ACC and European guidelines on hypertension. However, there are very few head-to-head comparisons in the literature and ACE inhibitors are far more commonly used than ARBs, so we felt this was an important evidence gap to help fill. ”

“Our study largely confirmed that both antihypertensive drug classes are similarly effective, though ARBs may be a little safer than ACE inhibitors,” Hripcsak adds. “This provides that extra bit of evidence that may make physicians feel more comfortable about prescribing ARBs versus ACE inhibitors when initiating monotherapy for patients with hypertension. And it shows that large-scale observational studies such as this can offer important insight in choosing among different treatment options in the absence of large randomized clinical trials.”

This study came from the OHDSI Large-Scale Evidence Generation and Evaluation across a Network of Databases (LEGEND) Project, which applies high-level analytics to perform observational research on hundreds of millions of patient records within OHDSI’s international database network.

“It is exciting to see the LEGEND initiative continue to deliver reliable, systematic evidence on the safety and effectiveness of antihypertensive treatments,” says Marc Suchard, Professor of Biostatistics, Biomathematics, & Human Genetics at UCLA. “Clinically, this current work demonstrates that ACE inhibitors and ARBs do not differ in their effectiveness in reducing cardiovascular outcomes, but ARBs provide a better safety profile, suggesting their preferential prescription when initiating antihypertensive treatment.”

The study was funded by the National Institutes of Health, National Science Foundation, and the Ministries of Health & Welfare and of Trade, Industry & Energy, Republic of Korea.