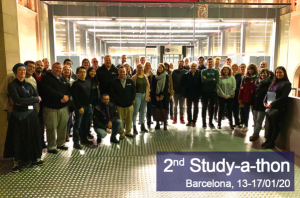 One year after a similar study-a-thon at Oxford resulted in a knee replacement study published by The Lancet Rheumatology, 40 stakeholders from across industry, academia, and health systems — representing 10 different nations and 14 observational databases — gathered to participate in a OHDSI-EHDEN Study-a-thon and run the world’s largest network studies on Rheumatoid Arthritis (RA).

It was an honor to collaborate with so many leaders in the battle against RA, and I truly believe we made a meaningful difference within one week. I am continually amazed at what can be accomplished when you combine invested stakeholders and high-level analytic tools in an open-science setting. – Patrick Ryan

The structured week included both the design and execution of the three observational studies, which the group plans to disseminate through European League Against Rheumatism (EULAR) abstracts and publications. The 2020 EULAR Conference will be held June 3-6 in Frankfurt, Germany.

“It was an honor to collaborate with so many leaders in the battle against RA, and I truly believe we made a meaningful difference within one week,” said Patrick Ryan. “I am continually amazed at what can be accomplished when you combine invested stakeholders and high-level analytic tools in an open-science setting.”

Among the stakeholders were several top rheumatologists throughout Europe, including Dr. Meghna Jani, a Presidential Fellow and Honorary Consultant Rheumatologist at the University of Manchester.

“I thoroughly enjoyed the innovative approach, collaboration, teamwork, and great science during the week, to address research questions that are important to both patients and clinicians,” Jani said. “Importantly the results have the potential to influence guidelines, be implemented into clinical care and personalize treatment for rheumatoid arthritis patients in the future.”

While the findings from the respective studies still needed further analysis and dissemination, the study-a-thon process showed once again how the variety of open-source tools and best practices developed within the OHDSI community, as well as the breadth of observational data standardized to the OMOP CDM from around the world, and depth of multidisciplinary expertise across the community can generate meaningful real-world evidence.

Patrick Ryan introduces the study-a-thon participants to both the OHDSI network and the OMOP Common Data Model.

“This is a disruptive model for open-science community evidence generation, and I’m proud that OHDSI has collaborated in multiple productive and important study-a-thons. We talk about ‘join the journey’ for a reason. We went from data to evidence by working together, and we took a journey in five days that few could have thought possible.” Ryan said.

EHDEN provided a daily account of the week, which opened with a short introduction to the topic, OHDSI, and study-a-thon process, after which the group focused on cohort definitions and evaluation with Data Partners from Spain, Estonia, the Netherlands, and IQVIA data sources (UK, Belgium, France, Germany). Supported by Rheumatology clinical and academic colleagues, they established the study cohorts per protocol for the Drug Utilization, Population Estimation and Population Prediction studies. The work around the abstract and manuscript content was initiated in parallel.

On Tuesday, the participants continued the journey by evaluating the cohort outputs from the multiple OMOP common data model-mapped databases and evaluating the definition for Rheumatoid Arthritis. By using the newly designed Cohort Diagnostics tool, confidence in the populations being studied could be evaluated and outcomes cohorts for specific adverse events were defined. Further work on the draft abstracts and manuscript content continued in the afternoon for the drug utilization, population-level effect estimation and patient-level prediction studies.

The study-a-thon included breakout groups to focus on the three main network studies.

On the third day, the group worked on evaluating the outcomes cohorts, validating the negative controls to be included and achieving agreement about propensity score matching parameters. A subset of clinicians finalized the consensus on negative controls following the group work. The group then split into three subgroups (drug utilization, population-level effect estimation and patient-level prediction), working on the content development of the various abstracts and manuscripts.

The study-a-thon group worked on various aspects of prediction during the fourth day, focusing on setting model development and validation parameters for predicting outcomes following RA treatment for adverse events such as infections, cardiovascular (myocardial infarction or stroke) and blood disorders such as pancytopenia. Results from the work on propensity matching were evaluated for the impact of covariants, and the negative controls. The rest of the day, work continued on predictive modelling, and the three groups on drug utilization, population-level effect estimation, and patient-level prediction studies continued work on data and abstract content. The team also agreed on alignment on the publication plan, target journals and timelines.

During the final day of the study-a-thon, the protocols were finalized, the results for the drug utilization, population-level effect estimation and patient-level prediction studies were unblinded, and the team interpreted the findings for submission to the EULAR meeting in Frankfurt.