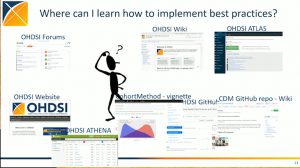 One memorable moment (during a day full of them) at the 2019 OHDSI U.S. Symposium came during Martijn Schuemie’s talk on best practices within the community. With a significant number of first-timers in the Bethesda North Marriott ballroom that day, Schuemie may have caused a moment of panic for some by noting all the different locations collaborators could search to follow the preferred OHDSI methods (pictured, right).

The panic quickly turned to celebration.

After announcing that all symposium attendees would receive their own copy (and setting off even more celebration), Schuemie discussed the contents of The Book of OHDSI during his talk. Video of that portion of his talk is available below, and it highlights the multiple ways community members can be aided by the book.

As noted in the talk, the Book of OHDSI is available in several forms, including a link on the OHDSI web site. For those who wish to have their own copy of the book, it is available on Amazon. 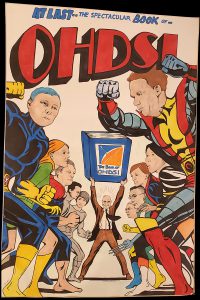 The Book of OHDSI poster, created by OHDSI collaborator Sarah Seager, was a hit during the Symposium.

The idea behind the Book of OHDSI came out of a conversation between Schuemie, Rae Woong Park and Seng Chan You during 2018. Fittingly, the latter duo was proudly able to announce that a Korean version of the Book of OHDSI is now available during the 2019 Korea Symposium.

Much like any aspect of the OHDSI community, the Book of OHDSI isn’t meant to be static. There will be updates to the text online, and likely an annual update in the preface of any major changes made in the past year. Documentation of OHDSI tools and best practices remains a critical aspect of educating a community, and the Book of OHDSI plans to remain a timely tool for the network.

“OHDSI is a brilliant open-science effort that has established a collaboration among more than 150 large organizations. Collectively these organizations carry healthcare data for a staggering half-billion lives. OHDSI’s pièce de résistance is its design of an open data model that specifies strict coding, privacy and security standards that all collaborators have agreed to adopt. The work enables the unification of data from multiple sources to provide the data mass, reproducibility testing and statistical power required by analytics, especially those powered by AI methods. The OHDSI effort has already produced novel approaches to large-scale data analyses and answered important clinical questions. However, it is just beginning, and much more remains to be done. The Book of OHDSI will enable other organizations to add to the analytic ferment, and to the data mass, needed to answer pressing analytic and clinical questions.” – Clem McDonald, MD, Emeritus Indiana Distinguished Professor of Medicine, wrote for the book back cover.

Following the symposium, Schuemie shared more thoughts on the Book of OHDSI, its development, and his excitement about the community reaction during the announcement.