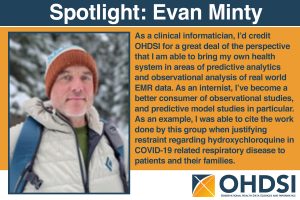 Evan Minty is a general internist and clinical assistant professor at the O’Brien Institute for Public Health at the University of Calgary, Canada. He splits his time between clinical practice, applied clinical informatics with Alberta Health Services (supporting their EMR deployments and decision support development) and research interests in clinical and EMR data science.

Evan completed his undergraduate degree in Biophysics at the University of British Columbia, his MSc in Physics at the University of Alberta, his MD and General Internal Medicine residency and fellowship training at the University of Calgary, and his MSc in Biomedical Informatics through Stanford University. He remains onboarded through Stanford University as a research affiliate.  He is an active member of the OHDSI community and is in the early stages of developing a Surgery and Perioperative Medicine Workgroup. He discusses that, as well as how he joined the community, how OHDSI impacted his COVID patient management in the last year, and more in this edition of the OHDSI Collaborator Spotlight.

How did you learn about OHDSI, and what made you decide to “Join The Journey”?

My original exposure was through the MSc at Stanford, and their participation through Nigam Shah’s lab. Their BMI program provided perspectives gleaned from computational sciences and bioinformatics, and OHDSI’s mission resonated with me immediately. It was a journey that other scientific communities had travelled in the past. To make forward progress as a scientific field, they had to share data standards, methods, and promote a culture of transparency.

Observational health science had been slow to move along that path for a myriad of reasons, one of which being the complexity of the data space. Even at that time years ago, what had been accomplished within OHDSI was jaw dropping. The work on the common vocabulary, the thought that had been put into the CDM, and the methods stack that was accumulating on top of it were impressive from every angle. Central to it all was the clarity of thought being brought to epidemiologic study, which was effectively being refactored and implemented anew in ways that respected insights from traditional designs, but with added statistical learning ‘sugar’.

I was hooked even before I got to know some of the people involved, and it turns out they’re great too.  I truly believe the people who are investing their time into this project are in the process of making enormous contributions to clinical data science that will take the rest of the field some time to process.  I’m very grateful to be able to continue to participate as a collaborator of Nigam Shah’s lab at Stanford.

Are there examples of how OHDSI studies, or tools/processes gained through community involvement, have directly impacted your own practice?

As a clinical informatician, I’d credit OHDSI for a great deal of the perspective that I am able to bring my own health system in areas of predictive analytics and observational analysis of real world EMR data. I can’t understate how important that’s been, in terms of my ability to help lead in some of these areas within Alberta Health Services. I’ve also used OHDSI tools such as ATLAS, Athena, Usagi, and other constructs to help solve various informatics problems for AHS. You don’t need a CDM to benefit from the cutting edge work this community does.

As an internist, I’ve become a better consumer of observational studies, and predictive model studies in particular. That has been very helpful in the COVID era. I was better able to appraise the observational studies that were being published, while OHDSI’s own work produced effect estimates that I was able to confidently bring to the bedside. As an example, I was able to cite the work done by this group when justifying restraint regarding hydroxychloroquine in COVID-19 related respiratory disease to patients and their families.

In this past year, it’s been a community I could turn to that was looking to create something positive from a situation that was dire.  It has always been open, welcoming, and generous, and I’m grateful for the chance to rejoin some efforts that I had to initially step away from when other system demands became intense.

You took a leading role in the Tufts study-a-thon during the 2020 Symposium in the work related to perioperative risk prediction.  There are plans to create a Surgery and Perioperative Medicine workgroup. Can you share why you feel this is an important group within the OHDSI community, and what contributions you feel like OHDSI can make in this area?

There is a great opportunity to study perioperative care with observational data. We can quickly agree on an event (a surgery) that occurred in a timeline, and we can attribute a temporary change in physiology that connects nicely to time-at-risk. There are large volumes of surgery that occur across the globe every year, so millions of people experience that time at risk. Our work here can have enormous impacts.

And yet, the area remains a thorny one for observational analysis. Conceptual boundaries (e.g. what constitutes a ‘major’ surgery) are underspecified in observational literature, and there are some challenging problems in connecting how our vocabularies can better reflect and organize the lived exposures of patients.

I had confronted some of those problems while configuring some pilot studies in perioperative prediction as I was finishing my MSc. It put me in a great position to contribute to the Tufts study-a-thon and its work towards recalibrating the ‘Revised Cardiac Risk Index.’ Like all OHDSI work I get involved in, I have learned an enormous amount from the people involved there.

At this point, the workgroup awaits the right timing and interest.  I’d want to make sure it has both the right people and sufficient bandwidth to be successful. Part of that will involve getting past this (hopefully final) wave of COVID.

What are some of your hobbies, and what is one interesting thing that most community members might not know about you?

My boys are 7 and (nearly) 6 years old, and keeping them busy is a full-time hobby for myself and my wife, Breanne. Calgary is located in the eastern foothills to Canada’s Rocky Mountains, so we try to use that outdoor playground as much as possible to ski, hike, and bike.

Some community members might remember I stepped out of an initial sprint of CHARYBDIS to attend to a health system sprint of our own. We managed to produce a descriptive account of what that looked like. Unfortunately, some of that planning is becoming relevant again for us. But I’m hopeful we’re almost through the worst of this. When we are, I look forward to seeing you all in person again.