NB! Classification Concepts (standard_concept='C') do not have a mapping to a Standard Concept.

To preserve the meaning of Source concepts indicating values of Measurements or content of Observations, “Maps to” are complemented with a comprehensive set of “Maps to value” relationships. Such mappings are considered to be equivalent. There are the following semantic groups of Source concepts which are mapped in such a way:

1. The hierarchical discrepancy between Source and Standard Vocabularies

It is not uncommon for heavily pre-coordinated Concepts (complex and fine-grained Concepts that are combinations of different dimensions). The coordination depends on the structure of the topology of the vocabularies from and to which the Concept is mapped. If they are not equivalent, no direct mapping can be established. But in order to maintain the ability to retrieve these Concepts when searching using hierarchical Concepts, two or more mappings are provided instead. 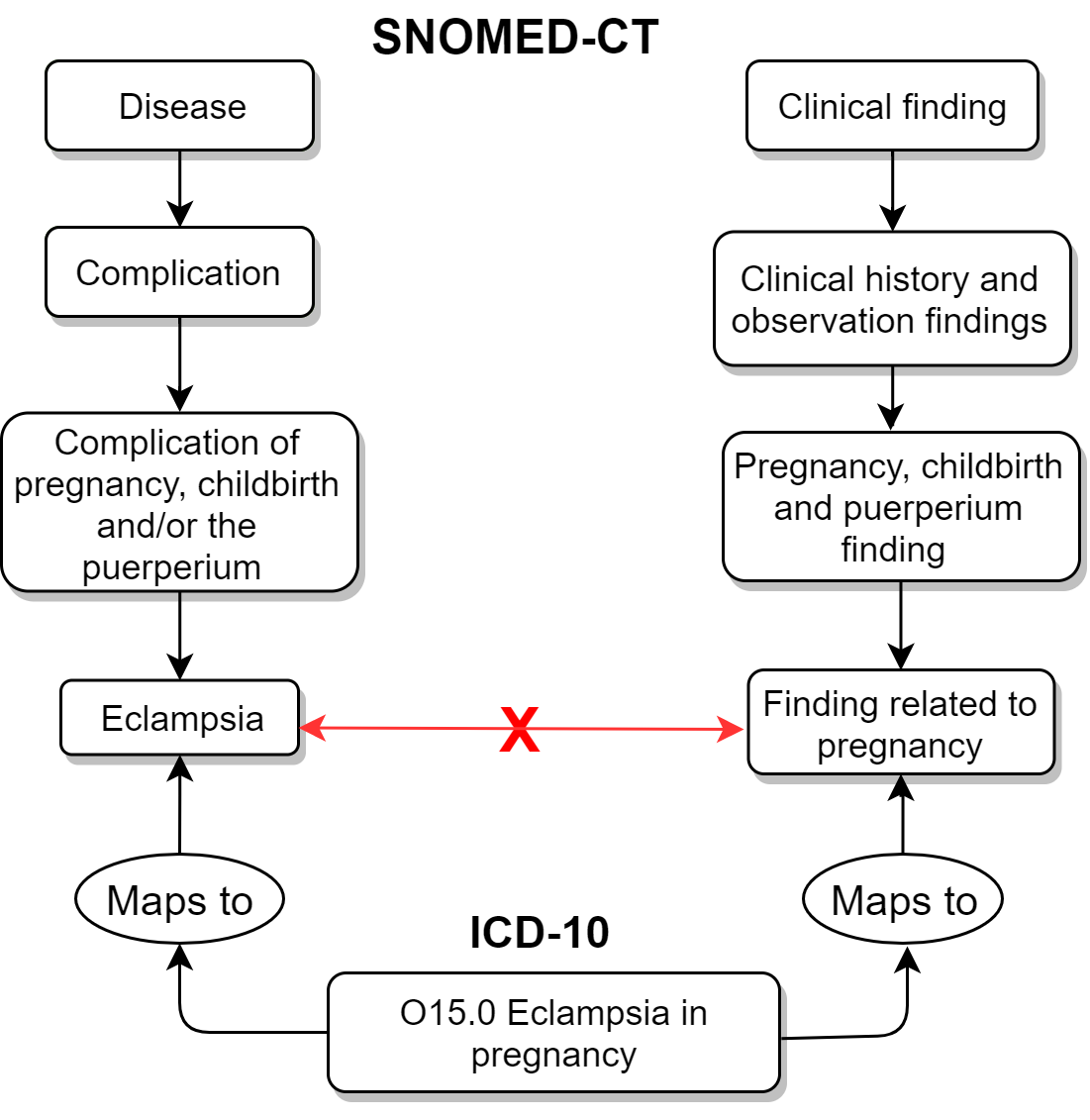 The solution for both examples is to map Non-standard concepts to several standard ones. Even though there is no distinct equivalent in SNOMED, hierarchical queries will retrieve the correct records.

This is possible due to the following reasons:

Other possible issues that one could encounter:

In general, Conditions are records suggesting the presence of a disease or medical condition stated as a diagnosis, a sign or a symptom. However, there are a lot of conditions that are not originating in the biological function of the human body but still require medical attention. Or they are true Conditions, but not at the time of the recording (History of) or in the person itself (Family history of). The mapping rules for these are as follows:

Aftercare after procedures. Those are mapped to a single concept 413467001 “Aftercare”, and with a second “Maps to value” relationship to the adequate procedure. For example, ICD10CM Z47.1 “Aftercare following joint replacement surgery” maps to both 413467001 “Aftercare” and to the procedure 4189532 “Implantation of joint prosthesis”. Note that “Aftercare” is itself not a condition, but belongs to the Observation Domain.

Late effects or sequelae of other conditions. If possible, these are mapped to single concepts describing them as such late effects. For example, ICD10CM S82.874S concept_id 45589204 “Nondisplaced pilon fracture of right tibia, sequela” is mapped to 197150 “Late effect of fracture of lower extremities”. The Domain is Condition.

History of a condition. These are conditions, but not at the time of the condition_start_date. Therefore, they are mapped to the Concept 4214956 “History of clinical finding in subject”, which is in the Observation Domain. The condition itself is recorded through the “Maps to value” relationship. For example, ICD10CM Z87.820 concept_id “Personal history of traumatic brain injury” maps to 4214956 “History of clinical finding in subject” and with “Maps to value” 4132546 “Traumatic brain injury”.

Pre-coordinated Concepts listing two or more semantic components through AND or OR. These concepts are treated with the following order of precedence:

Examples for these 3 possibilities are:

Maternal care. Many conditions require attention not because of a condition of a pregnant woman but of the fetus. However, all such conditions are being mapped to the mother anyway. For example, ICD10 O35.6 concept_id 45567927 “Maternal care for (suspected) damage to fetus by radiation” has two “Maps to” relationships to 199553006 “Fetus with radiation damage” and 289908002 “pregnancy”. Both conditions are recorded with the mother.

Need for immunization. These Concepts are mapped to an Observation indicating such an immunity gap. A second mapping with the relationship_id “Maps to value” is then directed to the Condition (represented as a SNOMED Concept) the immunization is inoculating against. Note that it is not mapped to the vaccine itself (which would be represented as a RxNorm Concept). For example, ICD10 Z23 concept_id 45556822 “Need for immunization against single bacterial diseases” maps to 170536002 “Vaccination required” and maps to value 87628006 “Bacterial infectious disease”.

Conditions resulting from the use of Devices. Adverse or other outcomes of the exposure to a device are mapped to 473023007 “Complication associated with device and with another “Maps to value” relationship to the device itself, if possible. For example, ICD10 Y73.0 concept_id 45590664 “Gastroenterology and urology devices associated with adverse incidents, diagnostic and monitoring devices” has a “Maps to value” link to 45767866 “Gastro-urological device”. 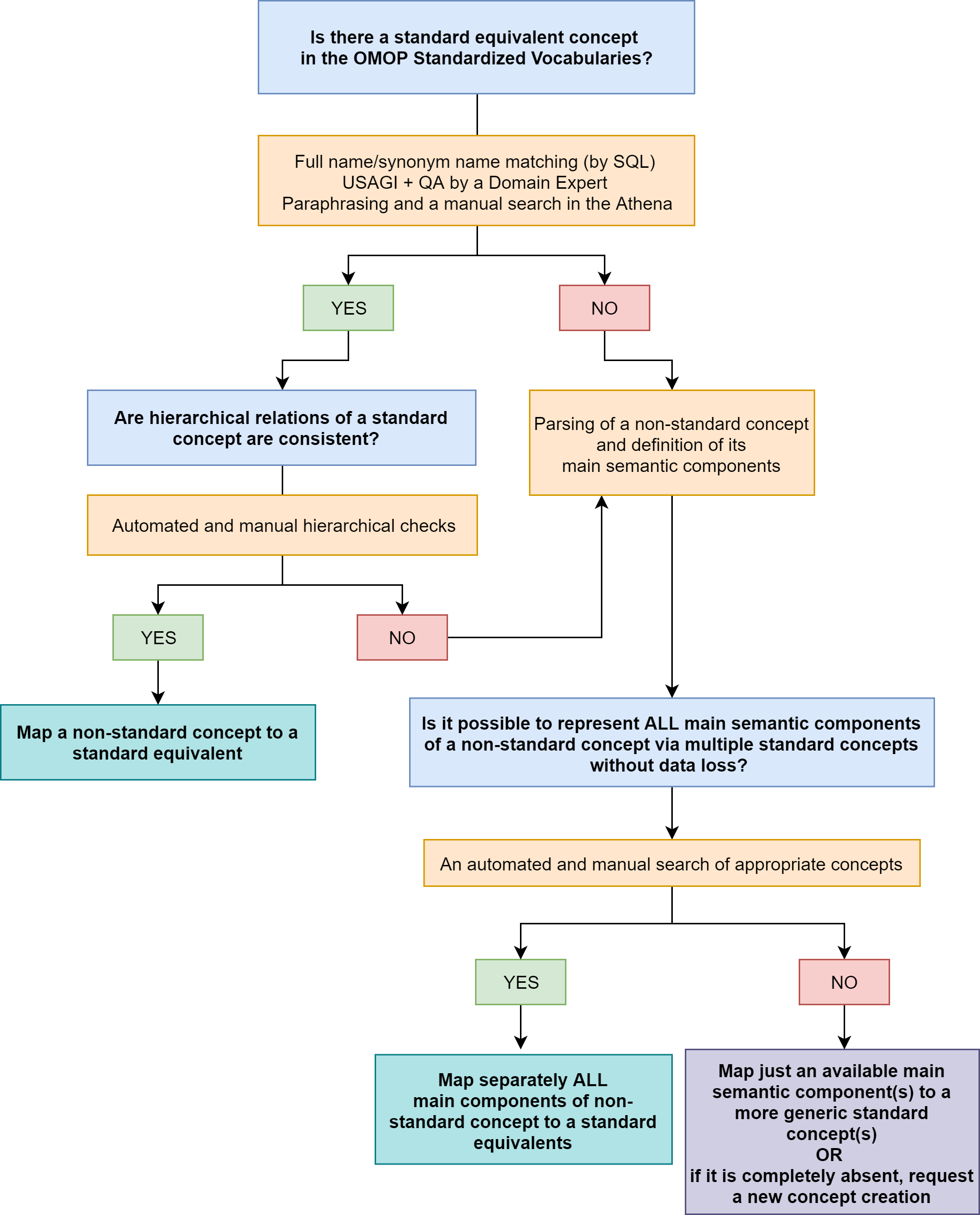