While there was extensive use of drug repurposing throughout the first 10 months of the COVID-19 pandemic, there was substantial heterogeneity over the types of drugs used for treatment purposes globally. Some drugs, including hydroxychloroquine, saw sharp declines in use, while adjunctive therapies grew into a more relied upon method for patient management.

In a number of cases, scientific discovery overturned misconceptions proclaimed via press conferences and social media.

The OHDSI network study “Use of repurposed and adjuvant drugs in hospital patients with covid-19: multinational network cohort study,” published May 11 by The BMJ, provides a global view of drug utilization in routine practice of more than 303,000 hospitalized patients from China, South Korea, Spain and the United States. The study highlights the need for future research on the safety and efficacy of the more commonly used treatments. 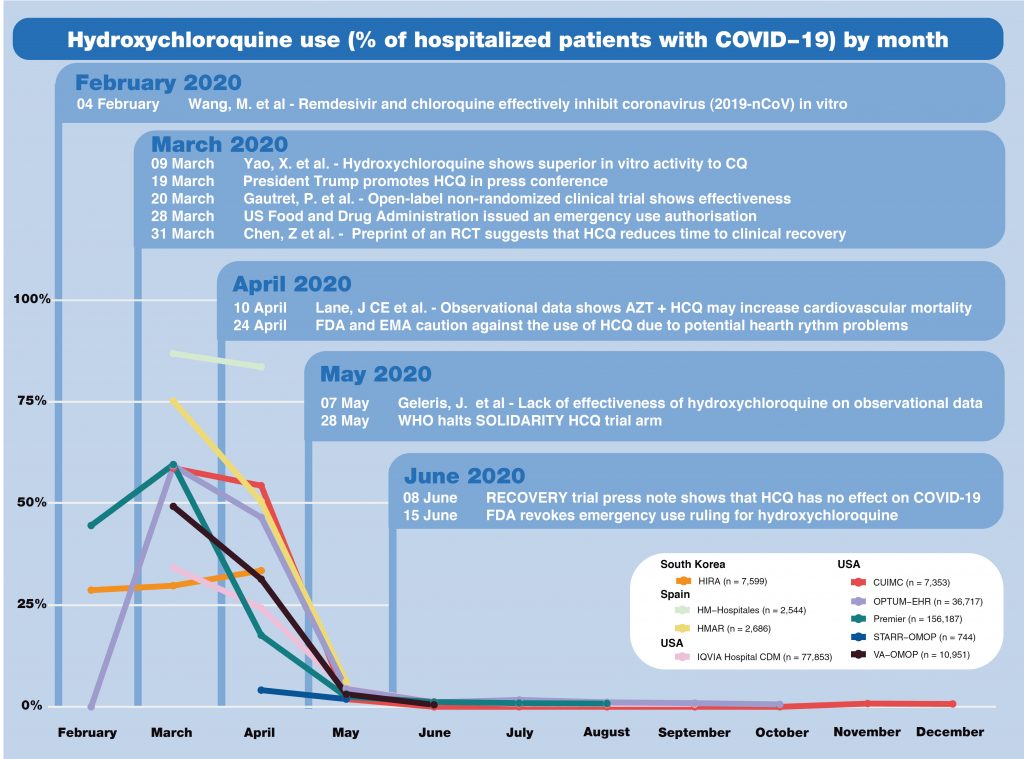 Time trends of the percentage (%) of use of hydroxychloroquine on days 0 to 30 after hospitalization in patients hospitalized with a positive test or a diagnosis of COVID-19 by month.

“At the start of the pandemic, when we knew little about COVID-19 and how to treat it, there were many differences between hospitals around the world on how health professionals were treating it,” said study co-lead Albert Prats-Uribe, a DPhil candidate and Research Assistant in Clinical Epidemiology at the University of Oxford.

“This was also influenced by political and social media pressures that spread misinformation,” said senior author Dani Prieto-Alhambra, Professor of Pharmaco- and Device Epidemiology at the University of Oxford. “Once reliable evidence from well-designed and performed studies came in, the situation quickly improved, and hospitals stopped using the ineffective treatments and turned to more effective ones.”

Deidentified patient data from 11 databases across three continents (Asia, Europe and North America) showed that more than 3,400 different medicines were used in the treatment of COVID-19 patients. Among the most popular in the earliest stages of the pandemic was hydroxychloroquine, which was heavily promoted without the backing of reliable evidence and later revoked from emergency approval status following both randomized controlled trials (RCTs) and related studies, including an OHDSI study showing dangerous risk of combining hydroxychloroquine with another early popular prescribed COVID-19 therapeutic, azithromycin.

Adjunctive therapies developed into popular forms of management for supportive care, with the most recognized being corticosteroids and anti-cytokines, both of which have been shown to reduce mortality in more serious cases. While these were lightly used early in the pandemic, results from the RECOVERY RCT showed efficacy in reducing death on hospitalized patients with severe respiratory disease.

“The use of ineffective medicines and potentially harmful combinations started with information from promising in vitro analyses, and were fueled by poorly performed observational studies, as well as misinformation campaigns in social and traditional media with clearly political intentions,” Prats-Uribe said. “This would have taken a long time to counter in the traditional scientific timings. With the work of a community of people around the world producing reliable evidence using observational data, we were able to shift these tendencies and influence decision-making to improve COVID-19 patients.” 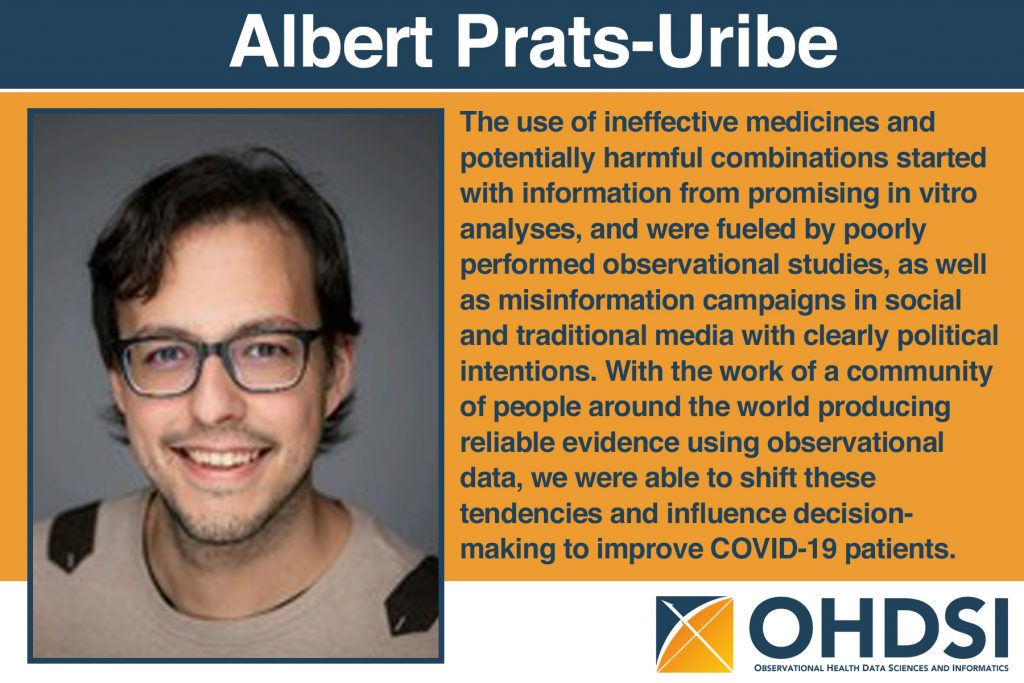 The study was developed and executed by the OHDSI (Observational Health Data Sciences and Informatics) community, a multi-stakeholder, interdisciplinary network that collaborates globally to bring out the value of health data through open science and large-scale analytics.

“OHDSI’s common data model provided the foundation for our community to collaborate together on common definitions for COVID-19 patients and to characterize their experience across a large number of countries and healthcare systems,” said study co-lead Anthony Sena, Associate Director of Observational Health Data Analytics at Janssen Research & Development, LLC. “Open-source tools such as ATLAS and the HADES libraries enabled us to work together using proven methods to gather results across Asia, Europe and the USA. It was a remarkable experience to work with so many talented people who brought data and seemingly endless amounts of energy to synthesize the vast result set assembled as part of project CHARYBDIS.” 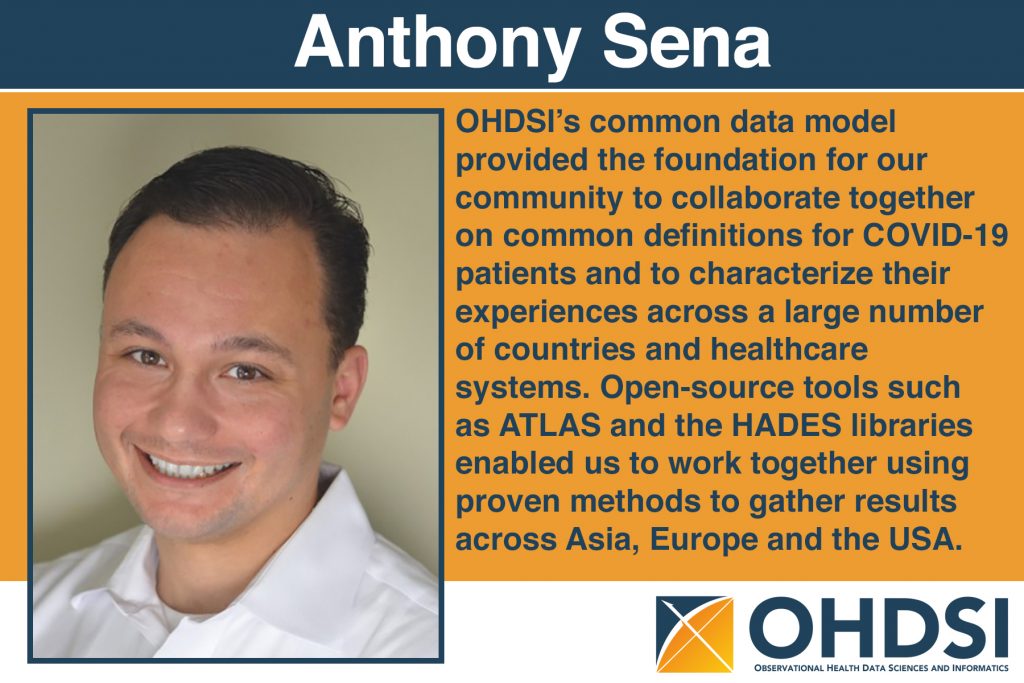 Interested in learning more about Project CHARYBDIS, or OHDSI’s research around COVID-19? Check out a few of the resources below and #JoinTheJourney!