↓ Skip to Main Content
Home › Who We Are › Collaborators › Tatsuo Hiramatsu, MD, PhD 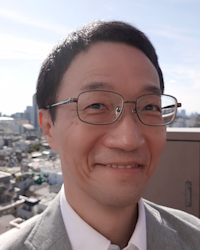 Dr. Hiramatsu is a professor of the Innovation & Research Support Center at the International University of Health and Welfare (IUHW), Japan. He has been seeking a fusion of medical informatics and epidemiology, and he is working on an OMOP database network with other university hospitals in his research project. Before moving to IUHW, he was at the University of Tokyo Hospital and served as its site administrator of MID-NET (Sentinel-like project in Japan) conducted by PMDA (Pharmaceuticals and Medical Devices Agency) and the Ministry of Health, Labor and Welfare.

Various professional experiences represent the journey of his life. He was engaged in an epidemiological investigation of a resident-based cohort, and received his PhD based on a nutritional epidemiological research. However, before all that, he had had a lengthy experience of being a patient himself :-), longer than that of being a clinician, including 6 months of hospitalization with multiple complications and a decade of a restricted lifestyle. Dr. Hiramatsu has a wealth of experience in PC software development with several horizontal software packages as a R&D engineer, a team manager, or the senior executive director of a PC software company. Another one of his strengths has been the area of Internet connection and server construction/operation, when in 1990 he started his Internet experience at the WIDE project (Widely Integrated Distributed Environment), which operated as Japan’s Internet backbone in the early days; it also aimed to coordinate academia and industry into an autonomous group that acts across organizational boundaries with new technologies in order to create a better society.