Wide eyed and bushy tailed, a group of us from Colorado were led by our fearless leader, Michael Kahn, to the 2016 Symposium where we were given a cup of the OMOP Kool-Aid. Prior to drinking the Kool-Aid, I did not know the next revolution in healthcare was coming down the pipe. One sip and I knew this was the path to the next revolution. Antibiotics gave us a huge leap forward in 20th century and observational data is going to give us the next leap forward.

After the Symposium, we, the University of Colorado Denver, were all in. We quickly decided to use the OMOP CDM as our core data model. We were making a big change and moving the data from the EHR database model (aka hoarder’s house) to the OMOP CDM (minimalist house). Life was good! As we reviewed the documentation, we realized some of the conventions were a little ambiguous or not definitive enough to give us the guidance we needed. Many work place discussions ensued about the correct way to do everything OMOP. So, I went to the forums for guidance. And many more debates and discussion took place! I’ve created over 30 topics since being welcomed into the community in June ’16, posted ~100 replies, and have been mentioned more than 50 times. I’m a frequent flyer and you may have seen my name before.

Fast forward to August 2017 and Christian Reich posts to the forum about a new work group named “THEMIS”, the Goddess of divine order. This was awesome, exactly what the community needed. Themis brought a unique opportunity to bring all the disparate points of view together and contribute to the development of a holistic and comprehensive approach for standardizing conventions throughout the OMOP CDM. More than 50 forum users responded to the call for participation!

The first homework was easy. Show up to the first work group meeting with all your complaints, issues, questions, and gray areas you need defined. The meeting was held the day before the US Symposium of 2017. THEMIS brought together representatives from all corners of the OMOP community: EHR data holders, data users, claims data holders, ETL experts, analytics gurus, software developers, vocabulary masters, old timers, newbies, organizers, OHDSI leadership, and more. The room was packed, people were sitting on the floor, ideas were plentiful, coffee was flowing, notes were taken, and THEMIS was born.

After the Symposium, we all took a deep breath and then self-assigned to the THEMIS focus groups which were roughly divided by domain. The list of issues from the 1st meeting was long. We brought up the issues and complaints, researched solutions, connected with experts, debated the options, wrote proposals, and created fancy slides for the next THEMIS F2F. Whew!

Out to warm and sunny California! Minnie Chou & friends hosted us at Amgen and supplied us with tasty treats and plenty of coffee! Unfortunately, the snowstorm on the east coast kept some THEMIS friends stuck at home, but they actively participated via webex. Again, there was a lot of discussion, frequent debates, plenty of clarification, and consensus on many topics were reached over two very busy days. Not every idea from the original Themis discussion came to a conclusion. Some items were thrown back for more community input or clarification. Or because the item didn’t have a champion to present it to the group. Here is where we landed after 2 days at the THEMIS F2F 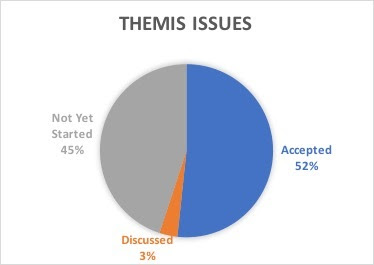 As you can see, we made a lot of progress! And there is still more work to be done!

If you want to review the work thus far, check out the THEMIS wiki. There are links to the project leads, the Focus Groups, the Workgroup members, and the GitHub repo. The Focus Group links contain the WebEx meeting info and issue Tracking Sheet with past meeting minutes linked as well. Mui Van Zandt will be sharing the latest updates on the May 8th Collaborators call.

Like everything OHDSI, THEMIS is open to everyone. You should join us! Bring your ideas for improving the conventions and any questions that need clarification. Together we can work this out!